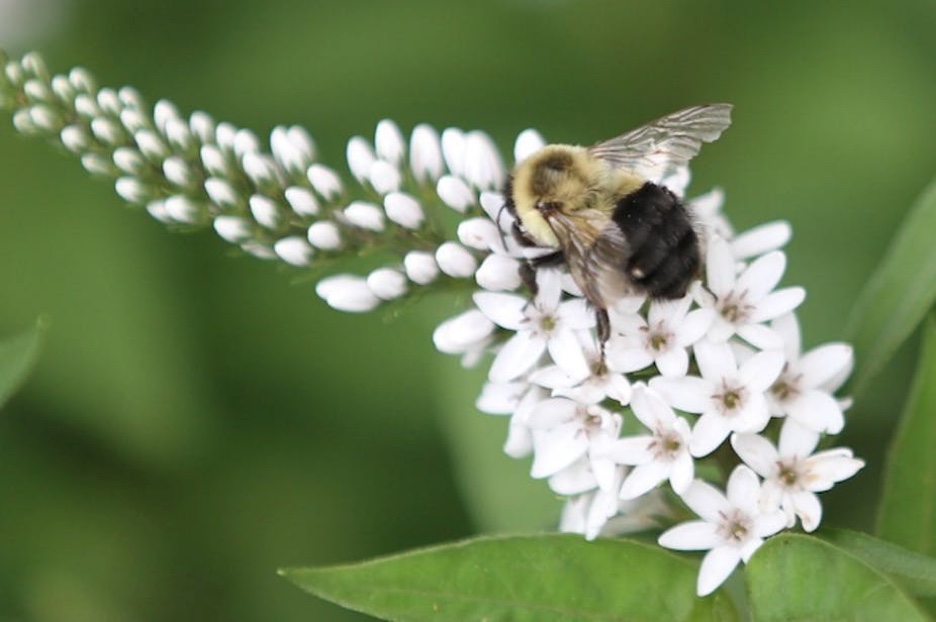 Bee Battles: Why Our Native Pollinators are Losing the War

As global commerce grows, the movement of goods is occurring at ever-faster rates. And with increased global trade comes the spread of non-native species. This includes invasive insects that are making life difficult for domestic bees.

Non-native species get introduced both intentionally and accidentally. However they migrate, though, their spread can lead to devastating results. Non-native species can dramatically reshape their invaded habitats and disrupt the interactions between native species.

After direct habitat loss, invasive species are the second greatest threat to biodiversity. Biodiversity is crucial to a healthy ecosystem, providing us services such as food, the natural resources that sustain our current lifestyle, and the building blocks of medicines.

Invasive species come in all forms – plants, animals and microbes – but all share common traits: they are non-native, they are increasing in prevalence, and they negatively affect native species.

Native bees in North America are declining drastically. Habitat loss is the number one reason for bee decline, with pesticide use, invasive species, and climate change also playing a major role. With the growth of cities and farms, habitat suitable for our native bees shrinks. And with competition and habitat degradation from invasive species, suitable habitat becomes even less.

We depend on native bees, like our humble bumble bees (Bombus spp.), to pollinate native flowers and crops. Bumble bees pollinate tomatoes, peppers, blueberries and many more of our favorite food items. Honey bees, which are widely used in agriculture and are suffering from colony collapse disorder, are a non-native species, and can’t replace the pollination services provided by native bees such as bumble bees.

But one invasive species in particular is threatening the livelihood of bumble bees.

New bee on the block

The European wool-carder bee was first discovered in North America in 1963 near Ithaca, New York, and since then, its impact has been felt from coast to coast. Wool-carder bees get their name from the nest building behavior of the female bees. Females collect plant hairs, called trichomes, by cutting them with their mandibles. The up-and-down motion they use during trichome collection to cut the hair-like fibers and ball them up is reminiscent of carding wool.

My research has shown that carding behavior induces chemical changes in the plant similar to what occurs when insects eat plants. These chemical changes signal other wool-carder bees, attracting them to the plant, which causes further damage.

In addition to damaging plants, female wool-carder bees compete with our native bees for flowers. Bees depend on nectar and pollen from flowers for food, and increased competition from invasive species raises concerns over the future of our native bees.

But the behavior of male wool-carder bees appears even more sinister. Males aggressively defend flower patches in order to attract mates. Males use evolved weapons on the base of their abdomen to attack any interloper who isn’t a potential mate, often causing severe injury or even death to the attacked bee. By decreasing competition for flowers, the male wool-carder bee hopes to entice more female wool-carder bees to visit his patch, thus increasing his chances of mating.

Of all our native bees, bumble bees (Bombus spp.) receive the brunt of attacks from male wool-carder bees. Therefore, my research focuses on the impact of these attacks on bumble bee well-being. My preliminary research shows that bumble bees avoid foraging for nectar and pollen in areas with wool-carder bees – likely to avoid attack. Because they stay away from areas defended by wool-carder bees, the number of flowers available to bumble bees decreases.

As bumble bees are already facing a shortage of flowers due to habitat loss, this additional restriction on flower availability is causing serious concern about the sustainability of local bumble bee populations. Because the population of wool-carder bees is growing, my current research is trying to determine the extent of the negative impact they are having on our precious native pollinators.

So what can we do?

There are a number of pollinator-friendly actions each of us can take.

15 Health and Well-being Benefits of Plants
By Charles Hall and Madeline W. Dickson

Why some species thrive after catastrophe – rules for making the most of an apocalypse
By Nicholas R. Longrich

Supporting Pollinators, Yourself, and Your Ecological Community with Anise Hyssop
By Gayil Nalls