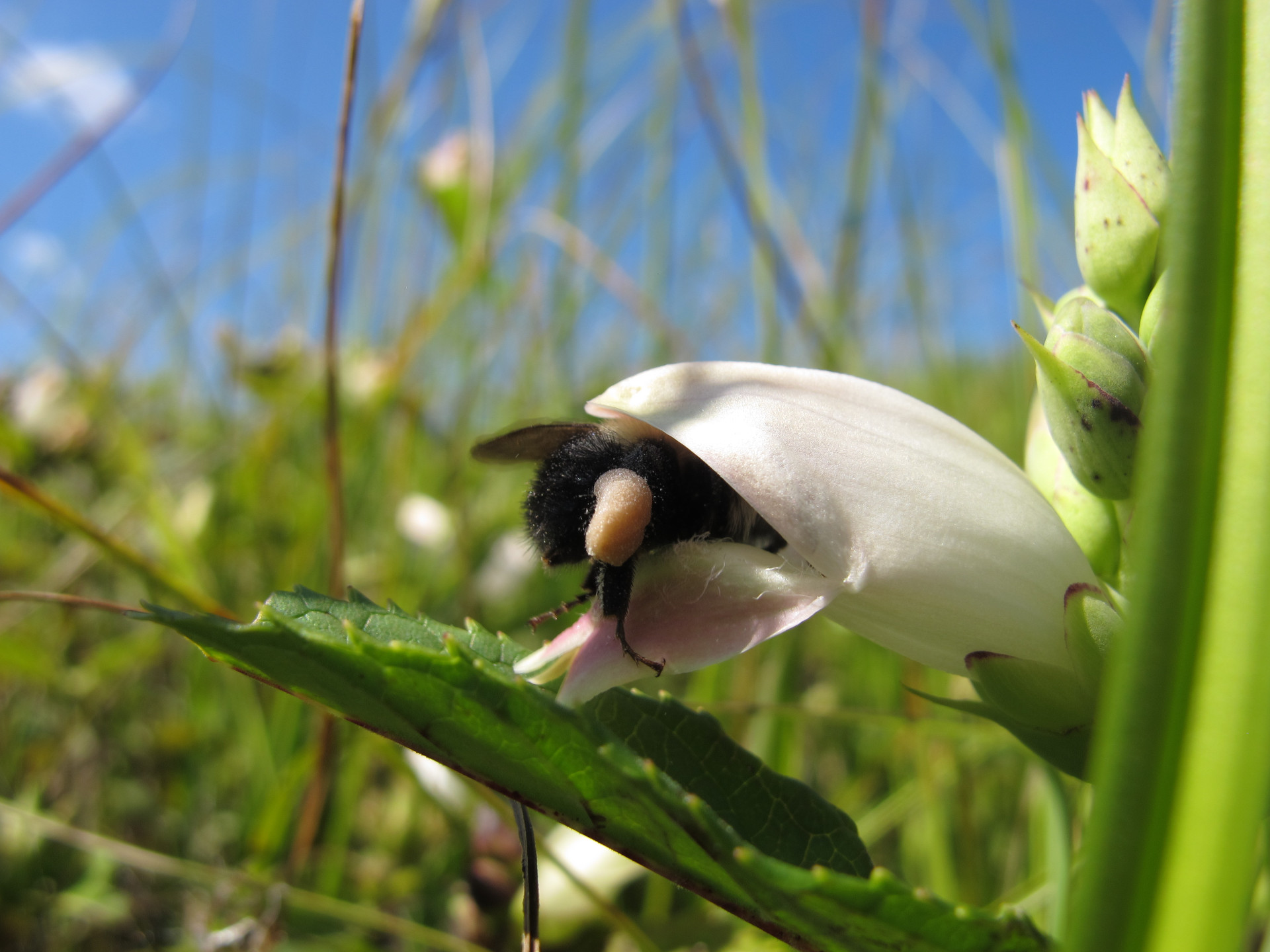 A bumble bee foraging for nectar and pollen at a turtlehead plant that produces the compound catalpol, which reduced bee parasite load. Leif Richardson, CC BY-NC-ND

Search for information on ‘self-medication,’ and you’ll likely find descriptions of the myriad ways that we humans use drugs to solve problems. In fact, the consumption of biologically active molecules — many of which come from plants — to change our bodies and minds seems a quintessentially human trait.

But plants feature prominently in the diets of many animals too. A growing body of research suggests some animals may derive medicinal benefit from plant chemistry, and perhaps even seek out these chemicals when sick. Chimpanzees eat certain leaves that have parasite-killing properties. Pregnant elephants have been observed eating plant material from trees that humans use to induce labor. You may have even seen your pet dog or cat eat grass – which provides them no nutrition – in what’s believed to be an effort to self-treat nausea by triggering vomiting.

In my research, I’ve looked at how bumble bees are affected by these kinds of biologically active compounds. With colleagues, I’ve found that certain plant chemicals naturally present in nectar and pollen can benefit bees infected with pathogens. Bees may even change their foraging behavior when infected so as to maximize collection of these chemicals. Could naturally occurring plant chemicals in flowers be part of a solution to the worrying declines of wild and managed bees?

Why do plants make these chemicals?

On top of the compounds plants make to carry out the ‘primary’ tasks of photosynthesis, growth and reproduction, plants also synthesize so-called secondary metabolite compounds. These molecules have many purposes, but chief among them is defense. These chemicals render leaves and other tissues unpalatable or toxic to herbivores that would otherwise chomp away.

Many studies of coevolution center on plant-herbivore interactions mediated by plant chemistry. An ‘arms race’ between plants and herbivores has played out over long time scales, with the herbivores adapting to tolerate and even specialize in toxic plants, while plants appear to have evolved novel toxins to stay ahead of their consumers.

Herbivores may experience benefits, costs or a combination of both when they consume plant secondary metabolites. For example, monarch butterfly larvae are specialized herbivores of milkweeds, which contain toxic steroids called cardenolides. While monarchs selectively concentrate cardenolides in their own bodies as defense against predators such as birds, they may also suffer slowed growth rate and increased risk of mortality as a consequence of exposure to these toxic compounds.

Interestingly, secondary metabolites are not only found in leaves. They’re also present in tissues whose apparent function is to attract rather than repel – including fruits and flowers. For example, it has long been known that floral nectar commonly contains secondary metabolites, including non-protein amino acids, alkaloids, phenolics, glycosides and terpenoids. Yet little is known of how or whether these chemicals affect pollinators such as bees.

Could secondary metabolites influence plants’ interactions with pollinators, just as they affect interactions with herbivorous consumers of leaf tissue? Similar to other herbivores, could bees also benefit by consuming these plant compounds? Could secondary metabolite consumption help bees cope with the parasites and pathogens implicated in declines of wild and managed bees?

With colleagues in the labs of Rebecca Irwin at Dartmouth College and Lynn Adler at University of Massachusetts, Amherst, I investigated these questions in a new study. We found that a structurally diverse array of plant secondary metabolite compounds found in floral nectar can reduce parasite load in bumble bees.

In a lab setting, we infected the common eastern bumble bee (Bombus impatiens) with a protozoan gut parasite, Crithidia bombi, which is known to reduce bumble bee longevity and reproductive success. Then we fed the bees daily either a control sucrose-only nectar diet or one containing one of eight secondary metabolite compounds that naturally occur in the nectar of plants visited by bumble bees in the wild.

After one week, we counted parasite cells in bee guts. Overall, a diet containing secondary metabolites strongly reduced a bee’s disease load. Half the compounds had a statistically significant effect on their own. The compound with the strongest effect was the tobacco alkaloid anabasine, which reduced parasite load by more than 80%; other compounds that protected bees from parasites included another tobacco alkaloid, nicotine, the terpenoid thymol, found in nectar of basswood trees, and catalpol, an iridoid glycoside found in nectar of turtlehead, a wetland plant of eastern North America.

We expected that bees might also incur costs when they consumed these compounds. But we found that none of the chemicals had an effect on bee longevity. Anabasine, the compound with the strongest anti-parasite benefit, imposed a reproductive cost, increasing the number of days necessary for bees to mature and lay eggs. Despite this delay, however, there were no differences in ultimate reproductive output in our experiment.

This research clearly demonstrates that wild bees can benefit when they consume the secondary metabolites naturally present in floral nectar. And bees’ lifetime exposure to these compounds is likely even greater, since they also consume them in pollen and as larva.

In other research, we’ve uncovered evidence that some of the compounds with anti-parasite function are sought after by bees when they have parasites, but not when they are healthy. At least in some contexts – including a field experiment with wild bees naturally infected with Crithidia bombi – bumble bees make foraging choices in response to parasite status, similar to other animals that self-medicate.

So what about practical applications: could this research be leveraged to help declining bee populations? We don’t know yet. However, our findings suggest some interesting questions about landscape management, pollinator habitat gardening and farm practices.

In future work, we plan to investigate whether planting particular plants around apiaries and farms would result in healthier bee populations. Are native plants important sources of medicinal compounds for bees with which they share long evolutionary histories? Can farms that depend on wild bee pollinators for delivery of the ‘ecosystem service’ of pollination be better managed to support bee health?

Delivery of nectar and pollen secondary metabolites to diseased bees is likely not the only tool necessary to promote long-term sustainability of these ecologically and economically important animals. But it appears that this could be at least part of the solution. Agriculture may come full circle, acknowledging that in order to benefit from an ecosystem service delivered by wild animals, we must consider their habitat requirements.

Leif Richardson is a USDA NIFA Postdoctoral Research Fellow at the University of Vermont.

A Mission to Save Farming: An Interview with Kathleen Finlay
By Gayil Nalls

Predicting the Future of Earth’s Forests
By Stuart J. Davies