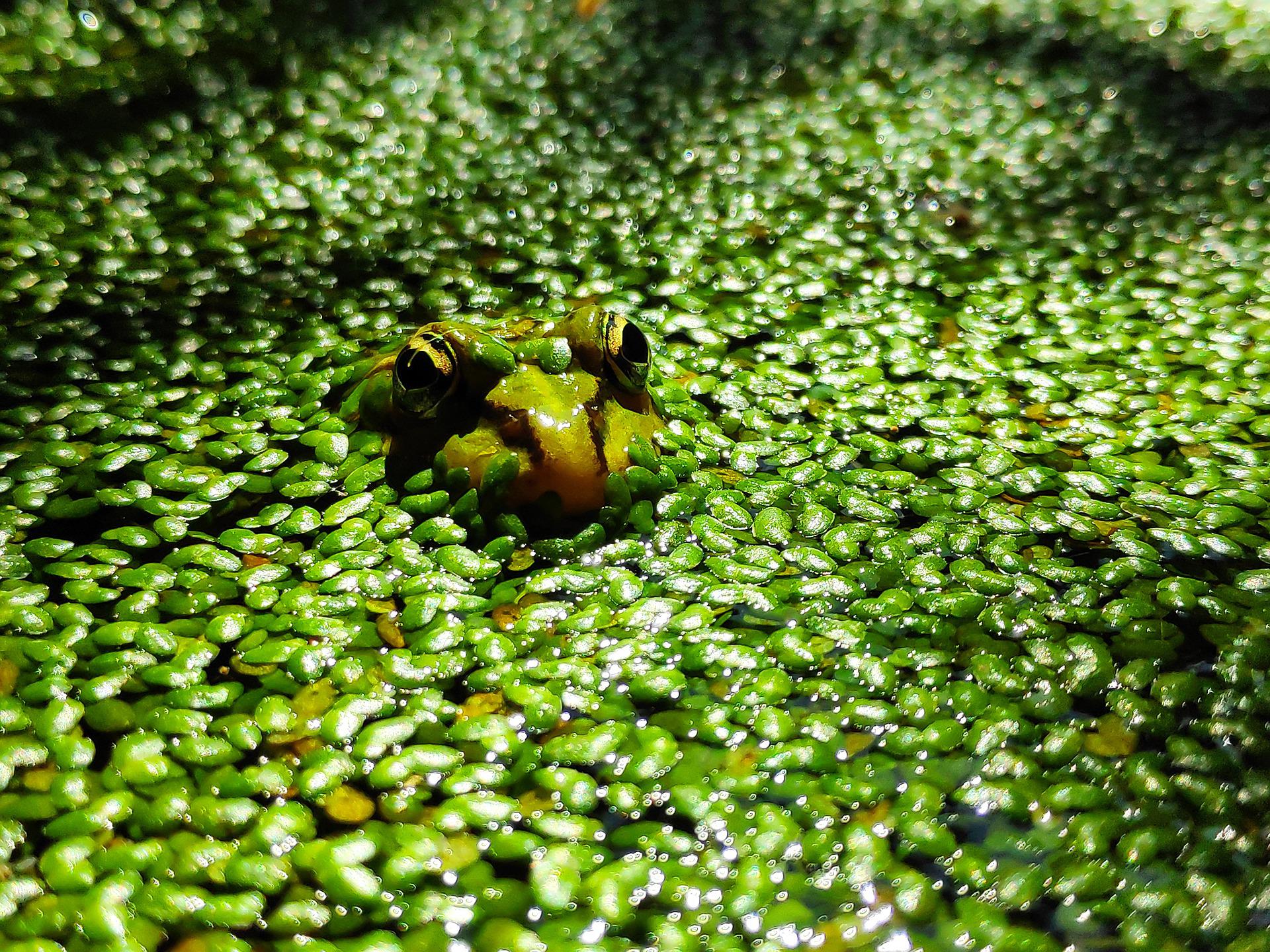 How to Bury Carbon? Let Plants Do the Dirty Work

Forty-nine million years ago, a small aquatic fern called Azolla wrested control of Earth’s climate. At the time, the landlocked Arctic Ocean developed a surface layer of freshwater, which allowed the ferns to grow unchecked in a wide-open environment. Billions of tons of plants died and sank to the bottom of the ocean, taking with them the carbon they had sucked from the air when they were alive.

The consequences were extreme. Geologic evidence indicates that atmospheric carbon dioxide levels plummeted more than 80 percent over 800,000 years, sharply ratcheting down Earth’s thermostat. Prior to the inferred “Azolla Event,” most of the globe was lush and tropical. Afterward, the Arctic cooled by nearly 40 degrees Fahrenheit, the poles froze, and our planet entered a lurching cycle of ice ages that continue to this day.

The Azolla Event was an environmental catastrophe for life in the Eocene epoch. Today, though, it is a source of inspiration—even optimism—in dealing with human-driven climate change. For years, some researchers have promoted the idea of geoengineering, using technology to offset the effects of carbon emissions. Such schemes are commonly dismissed as pie in the sky, but the Azolla Event suggests otherwise. After all, if a bunch of dumb ferns could naturally perform carbon sequestration on such a tremendous scale, why couldn’t clever humans deliberately do the same thing?

“It’s clear that plants have been able to contribute to really big geological events in the Earth’s history,” says Rob Martienssen, a plant geneticist at Cold Spring Harbor Laboratory in Long Island. “Being able to harness that power and speed it up seems like a realistic goal to me.”

Planting another enormous fern garden in Arctic waters isn’t an option this time around. The Azolla plants saw to that, eliminating their own habitat when they transformed the global climate (humans, take note). As a stand-in, Martienssen has set his sights on duckweed, the ubiquitous, scum-like greenery that spreads across stagnant ponds in summer. “Just like Azolla, it’s an aquatic plant that grows extremely rapidly. It really does the same thing,” he says.

Each individual duckweed plant consists of little more than a single, oval leaf roughly the size of a grain of rice that floats atop still or slow-moving freshwater. What they lack in size, though, the plants make up for in fortitude. Duckweed is one of the fastest-growing plants on Earth. A colony can double in mass every two days and is so hardy that it can grow in wastewater, according to bioengineer Jay Cheng of North Carolina State University.

Martienssen became intrigued by the extraordinary vigor of duckweed about a decade ago, partnering with Brookhaven National Labs to explore its potential as a raw material for making liquid fuels to replace petroleum. In principle, plant-based fuels would be endlessly renewable and carbon neutral—that is, the plants would absorb just as much carbon during their growth as they would emit when burned, adding no net carbon to the environment. Although he is still pursuing the biofuel angle, supported by a $6.5 million grant from the U.S. Department of Energy, Martienssen has since been bitten by a more radical idea: If we could harvest vast quantities of fast-growing duckweed and dispose of them Azolla-style, we could take their carbon out of the environment entirely.

Step one would be finding a way to transform masses of duckweed into an efficient carbon-absorption machine. Growing normally, aquatic plants like duckweed have been estimated to take in up to 10 times as much carbon per acre as a healthy forest—good, but not good enough. In an industrialized setting, Martienssen proposes, engineers could use air-capture technology to pipe in extra carbon dioxide that would boost the plants’ growth, accelerating the process. “We would grow them in indoor farms with LEDs,” he says. “We’d need very little water, since can grow in very shallow water or even in tubes or bags, to produce huge amounts of duckweed.”

Even so, this would be a long-term project; after all, it took the Azolla ferns 800,000 years to remove most of Earth’s carbon dioxide. Fortunately, we don’t need to go nearly that far. Rolling back modern atmospheric carbon dioxide levels by just 10 percent would have significant climate benefits, and it would reduce the job to the equivalent of 8,000 years of Azolla growth. Intensive cultivation could then speed things up considerably. “If we use an indoor environment with highly enriched carbon dioxide, maybe we could get the number to 80 years,” Martienssen says. “These are back-of-the-envelope calculations, but it seems to me that with the right investment and economic incentives, we really could do it,” he says.

That would then lead to step two, finding a place to dispose of all that duckweed. Sure, it could be treated like industrial waste and stuffed into airtight containers, but Martienssen is drawn to a more elegant solution. He notes that peat bogs around the world are being systematically drained and burned, destroying valuable ecosystems and further boosting greenhouse emissions. Harvested duckweed could potentially be converted into artificial peat and used to build up the bogs. Once buried, peat remains sequestered for thousands of years or more.

There would be a tidy symmetry in this approach. Much of our current climate woes come from digging up and burning ancient plants that transformed into fossil fuels. “Making synthetic peat deposits would be like reversing the fossil-fuel industry,” Martienssen says. “It would be running the process backward and doing something a bit more natural.”

The biggest obstacle to using duckweed for climate control is the magnitude of the job. Really, that is the existential obstacle to any proposed geoengineering scheme, because the scale of human greenhouse emissions is so ridiculously vast. Last year, human activities released the equivalent of 43 billion tons of carbon dioxide, according to an analysis by the climate-research group Carbon Brief; that’s the mass of a good-size mountain. A bit over half that amount gets absorbed the land and water, leaving an extra 19 billion tons floating around in the atmosphere.

As Martienssen’s calculations show, there is no easy way to make that much carbon disappear, even with the help of fast-growing plants. At the Salk Institute for Biological Sciences in La Jolla, California, plant biologist Wolfgang Busch thinks that Martienssen has the right idea but is approaching it the wrong way, or at least, not the easiest way. Cultivating duckweed would require creating a vast new industry. Busch points out that we already have a global infrastructure of plants that could be adapted to reduce carbon emissions—farms.

“If you reinvent the wheel, it will take a long time. In agriculture, you already have people planting updated seeds every year,” he says.

The way it’s practiced today, farming is actually part of the problem. “Soil carbon content has been reduced dramatically over the past century in industrialized, monoculture agriculture,” Busch explains. The carbon that was stripped out of the dirt has gone straight into the air, contributing significantly to climate change. Meanwhile, the crops themselves are no help. Farmers harvest and till, harvest and till, over and over, cycling carbon in and out of their fields with no net carbon absorption.

In 2017, a group at Salk led by plant biologist Joanne Chory founded the Harnessing Plants Initiative to find ways to make farming part of the solution instead. Busch, an expert in root growth, joined the project and became its co-director. The group soon zeroed in on the idea of genetically altered crops that would put carbon back into the soil, and then keep it there.

Busch and his group hit on two types of genetic medication that could do just that. Plants could be altered to grow deeper root systems that would leave more of the roots (and their carbon content) buried in the soil after harvest. More dramatically, the Salk researchers realized that they could also engineer crops so that their roots would produce suberin, a waxy compound found in cork. Much like the cork in a wine bottle, fragments of the suberin-infused roots would then take an extremely long time to decompose. Up above, harvesting would go on as usual; down below, the roots of the crops would accumulate in the soil, building up its stored carbon. In essence, every square foot of farmland would become an Azolla event in miniature, entombing a little puff of atmospheric carbon dioxide.

Like Martienssen, Busch runs what-if numbers to make his approach could have a meaningful impact. “There’s already more than 600 million hectares of cropland worldwide,” he says. “There are five target crops we think we can deal with: corn, soy, wheat, rice, canola. We considered that at some point in the future, 70 percent of those crops could be enhanced. Then we asked, ‘What would happen if we could stabilize 30 percent of the biomass in the root mass?’ You end up with 5.5 gigatons of carbon dioxide per year, which is roughly 30 percent of the annual surplus [human emissions] that is leaked in the atmosphere. That was to us encouraging.”

As soon as you talk about messing with the plants that people eat, Busch knows, both consumers and producers get worried. Will the crops be safe? Will they be just as good to eat? And even if they satisfy those basic concerns, will they be just as efficient and profitable to grow? “Without seed companies that will allow us to distribute seeds to the farmers, and without the farmers who are interested, this project will never fly,” he says.

To provide some empirical answers, the Harnessing Planets Initiative has started collecting data from two small field trials in Yuma, Arizona, and the Central Valley of California, working with local commercial partners. COVID-19 slowed down the plans for 2020, but next year Busch aims to expand the experiment to at least 10 sites, bolstered by grants from the TED Foundation’s Audacious Project and the Bezos Earth Fund. His group is also working to build partnerships with universities, agribusinesses, and non-governmental organizations. “This is more than just a science project,” Busch insists. “We really want this to succeed.”

The goal is to build up a general understanding of how well carbon-burial works in different types of soil, as well as demonstrating that suberin-enhanced crops can match the quality and yields of their progenitors. Results from the Harnessing Planet Initiatives studies could have implications that go well beyond farming; for instance, they could boost the duckweed concept as well. “Their idea is to put the suberin gene into crop plants, but there’s no reason why we couldn’t put it into duckweed,” Martienssen says. Enhanced duckweed could offer a more effective, longer-lasting way to sequester carbon.

Most broadly, both Martienssen and Busch see plants as an important, wildly under-appreciated tool for addressing carbon emissions. Last March, the Salk Institute hosted Plant Carbon Drawdown 2020, a symposium that drew researchers from around the world. The wide-ranging conversation covered ways to absorb more carbon in wetlands, forests, oceans, and even through rock-weathering. At the institutional level, though, the idea of using plants to counteract climate change pretty much begins and ends with the idea of sticking more trees in the ground.

Busch hopes to shift his colleagues’ perceptions about the power of plants. “We should, as a society, put money into this because it’s really important, and it’s realistic,” he says. “There’s a huge potential to make a global impact by changing plants in a manner that’s beneficial for us.”

Corey S. Powell is co-host of the Science Rules podcast, creator of the Out There blog, and co-founder of the Science Literacy Foundation. On Twitter: @coreyspowell

This article was previously published in Nautilus.

Tapputi Badakallim, The Oldest Perfumer on Record
By Nuri McBride

Who Are You Going to Call? —Earth Sangha
By Liz Macklin