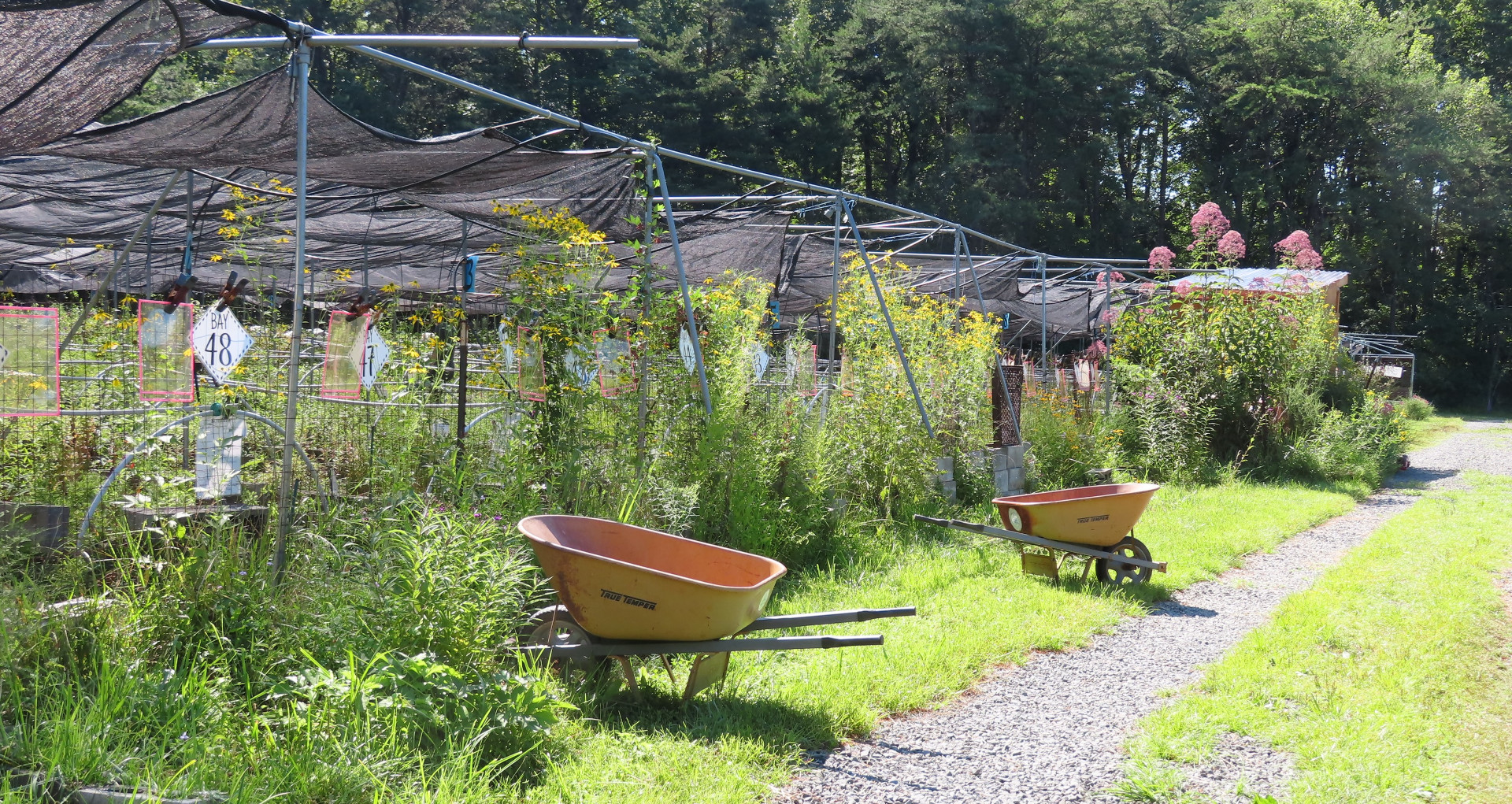 Who Are You Going to Call? —Earth Sangha

In Northern Virginia’s land of condominiums, subdivisions, expressways and international airports, Earth Sangha’s Wild Plant Nursery lies tucked between public playing fields and a strip of woodland. In a quiet corner, it stands out as a leading source for native plant conservation. Anyone visiting each month might see over 350 varieties: ferns, milkweed, asters, boneset, sunflowers, blazing star, beebalm, phlox, violets, goldenrods, and a host of other forbs, plus grasses, shrubs, vines and trees. Almost all are propagated from seeds or spores gathered, with permission, from local parks, right-of-ways or other wild areas. In our community, if an especially rare native species needs to be sought out and saved, we know who to call: Earth Sangha.

“With extraordinary spirit” describes the amount of enthusiasm and dedication to conservation present from the nursery’s early beginning in 1977. Co-founders Lisa and Chris Bright drew inspiration from Buddhism, with a first precept, “Let us not harm but respect all forms of life.” Earth Sangha operates as a nonprofit, dedicated to growing native plants, restoring native plant communities and removing invasive species. With Asociación de Productores de Bosque, Los Cerezos, the group also supports Tree Bank Hispaniola in the Dominican Republic. There they focus on protecting tropical forests and growing local native trees, while sponsoring farms that produce shade-grown coffee within forest fragments or in restoration areas. Scientific research guides all activities, and staff and volunteers come from diverse backgrounds. Many hands contribute to the nursery’s successes.

He explains, “Over the past few years we’ve worked with Fairfax County Park Authority on some careful reintroduction work for Pycanthemum torreyi, which is a globally rare mountain mint species. It’s only found along the eastern U.S. It’s rare or threatened in every single state in which it occurs. There, I think, is only one population in Fairfax County…We’ve grown out some [of this species] to re-establish it into areas where it will hopefully suffer from fewer human impacts, and there will be ongoing management to prevent invasives from crowding it out.”

He draws a comparison with efforts to preserve Solidago rigida, (stiff goldenrod) a species that is rare in the state of Virginia, although more common in the Midwest and Great Plains states. The Washington metropolitan area is on the edge of its natural range.  Bright says, “We [in Fairfax County] may have unique genetics relative to other populations, in part because our populations are kind of fragmentary… we want to preserve those.”

In Fairfax County, Solidago rigida plants grew on a plot of parkland with utilities easements. Botanists had visited the area and said the plants were at risk from disturbance. Earth Sangha worked with the county by collecting seed to grow out and establish a new population. The model for reintroducing rare species is, as Bright says, “not just to amplify it and to get it out everywhere, but to make sure we have specific, proper habitat – maybe historically documented areas where it’s been.”

Documented histories of native plants in Virginia have existed since the 1700s. One of the first written catalogs was John Clayton’s Flora Virginica, published by Gronovius in 1735.

And there is the Smithsonian, in Washington, D.C., which Bright explains, “has the foremost American collection of pressed plant species… These are not just tools for botanists to true up plant ID but also historical records. So once a botanist takes a sample of a plant and they press it and they mount it, it also gets a card, saying what it is, who collected it and where they got it from. There are stacks – sheets and sheets of these things that you can look up. A lot of them are digitized now. You can get a sense of ‘Hey, we used to have this stuff around here and now we don’t.’”

He points out that all of us can make our own observations. People don’t have to live in a location for very long before they recall something they used to often see that now seems scarce.

For groups that want to head off destruction, Bright has several recommendations. Work with partners on restoration. Reduce stressors by removing invasive plants, so that native species have access to nutrients, light and pollinators. And Bright also points out the need for a community effort to reevaluate the balance of parkland between recreation and conservation activities. With very tight budgets park authorities have to focus on revenue generating activities. Bright adds, “Passive conservation doesn’t generate revenue, and it shouldn’t. We shouldn’t charge people to go for a walk in nature. The reality is that there is a lot of pressure from a lot of different constituents.”

He sees a role for everyone. “Native plant conservation on private property, that is people’s homes and gardens, commercial landscapes, HOAs, condo associations – all of that – is an absolutely necessary component… that will help reconnect our wild populations with each other.”

He goes on to say, “A lot of the species that evolved to cross pollinate with each other are susceptible to inbreeding depression, that is when populations get fragmented, the whole population size drops, and the plants as a whole become less healthy. The first signs can simply be low seed viability and that’s something we’ve experienced as growers. Some plants don’t form a lot of seed, and the seed they do form tends not to germinate. We think these are warning signs.”

In expanding suburbs with new roadways, parking lots and more paved land, pollinators like bees, butterflies and other insects cannot visit one group of plants and then easily move to the next. Plants begin to lose their genetic interconnection. In Fairfax County, public parkland makes up a little under 10 percent of total land area. Bright advises, “Ecologists like E.O. Wilson and Dr Doug Tallamy say that a third to 50 percent of our land mass must be in conservation – has to be in native cover… We absolutely need to see that in [more] pollinator gardens and monarch way stations.”

Despite challenges, his message continues with a hint of optimism. “We’re not where we need to be… Our hope has always been at Earth Sangha, that if we can make plant conservation work here in an area where most of the economics are pointing us in the other direction – toward cutting down more forest, toward removing more wetlands, toward paving over our meadows… if we can hang on to as much diversity as we can, then there is hope for communities elsewhere in the country where the economic trends are not pointed so dramatically toward paving every square inch.”

In our own communities, each of us can play an important role.

You will also want to checkout their Native Plant Compendium: https://www.earthsangha.org/compendium

After working as an architect and teaching design workshops for children, Liz Macklin became a Virginia Master Naturalist. Now she joins other volunteers in local parks pulling invasive switchgrass and looks forward to autumn mornings volunteering at Earth Sangha.

I would like to thank Lisa Bright, Matt Bright, Sarah Mard, Katie Danner and Jan Siddle for their help in making this article possible.

Tapputi Badakallim, The Oldest Perfumer on Record
By Nuri McBride

How to Bury Carbon? Let Plants Do the Dirty Work
By Corey S. Powell