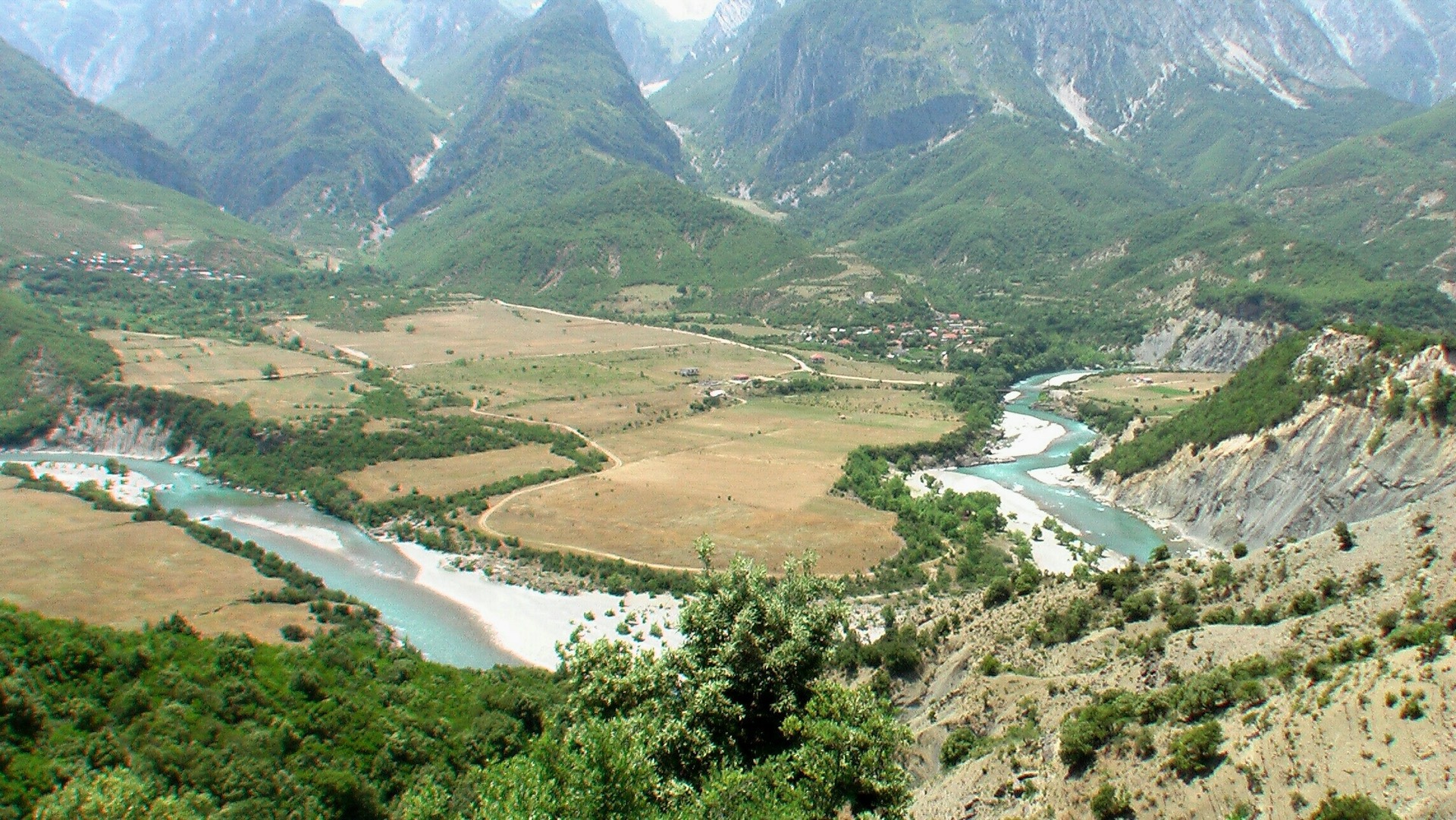 Albania has come a long way in the past three decades. Emerging from a largely closed Communist economy to an open, free-market democracy, the country has garnered international attention from businesses for its talented and driven workforce, and love from tourists for its breathtaking array of natural wonders. One of those wonders is the Vjosë River, a wild river that runs from Greece up through Albania. While the Vjosë is currently well-preserved, the threat of hydropower means it could soon see dramatic change for the worse.

Olsi Nika of EcoAlbania is among the many campaigning against hydropower and for greater protections for the wild river. He explains the plans for a national park, the international attention his work has gotten, and what readers can do to help preserve the park.

To start, can you introduce our readers to the Vjosë River and what makes it a special place?

Vjosë is the second largest river in Albania. It’s roughly 270 kilometers long, shared between Albania and Greece… What’s unique about the river is that, it’s actually not 270 kilometers, but roughly one thousand kilometers if you include all the tributaries and all the branches that make its living river system. Vjosë is composed of a number of intact little rivers, and that creates a living river system which is rare nowadays in central European countries.

Why is it under threat?

There are plenty of issues in the watershed. There’s the impact of the water pollution, mainly from agriculture. It’s not that intensive, but it still has an impact… In the lower part, there are other problematic issues like the extraction industry of oil… There is also urban pollution, which is evident in all the sections of the river; sewage pollution from urban wastewater and solid waste are not really managed, so they end up in the water. The next thing is deforestation, which increases the level of the water. This is not only a big problem in Vjosë, but in Albania in general… There is also another problem which deals with harmful methods of fishing… All these are threats—but all of these can be managed if there’s a will. And if you put a functional system in place to tackle these problems, they can be solved in time.

The biggest threat that we are fighting against, then, is the construction of hydropower plants. Hydropower is so devastating that you can’t get back the river anymore. It’s irreversible. That’s why I left this problem for the end. In the Vjosë itself, there are eight dams planned—large ones. With the tributaries, there are another 36 or 37 dams planned. The specifics are always changing—[but] currently the number is roughly 45 dams in the entire river basin.

What is the proposed solution to this issue? There’s talk of turning it into a national park—what does that mean?

The national park will not tackle all of these problems… [but] ‘national park’ is a label that offers a layer of protection. It’s a label put on a piece of nature that holds significant nature conservation values, and the Vjosë deserves to the label of ‘national park.’ It hosts a huge diversity of species and habitats—it’s a functioning river system! It deserves to be proclaimed as a national park — and that would actually make it the first ‘wild river national park’ in all of Europe. That is also a kind of brand—it’s catchy, and it attracts attention to it for scientific and research reasons, for tourism. A national park could also make tackling the other problems a bit easier. There is more attention, more management, and more money in order to resolve some of the other problems I mentioned before.

Prime Minister Edi Rama has discussed the river area as a ‘natural park.’ Why is that different from a national park, and why is the distinction important?

That’s the reason I had to be clear and precise about the wording. A ‘national park’ will not allow any major infrastructure project like a highway or hydropower, but a ‘nature park’ is in a lower protection category… If we don’t proclaim it as a ‘national park,’ we might lose all of the conservation that Vjosë has and deserves.

Up until now, there’s been this discussion between us and the government… The government is insisting that this should be a ‘nature park,’ because a ‘national park’ is something too big with too many restrictions for the local communities, etc. Meanwhile, all of the things we are bringing to the table show that the opposite best scenario is true! A national park can serve as a good opportunity for local communities to benefit, because ‘the first wild river national park in Europe’ is something much bigger than just ‘a nature park on some pieces of the Vjosë.’

Also, if you have this big national park, all of the other stakeholders might jump into the process of solving certain problems that I mentioned, like the sewage system, urban waste, solid waste management, etc. We think that we are very close to convincing the government to at least seriously consider the national park option. We of course see that even the ‘nature park’ might be a good step toward the final goal, but surely it’s not enough. We are clear in this position.

So, this is where we stand. Of course, when we started campaigning for the preservation of Vjosë, we were very distant in our arguments—the government only wanted to build hydropower because they thought that would be the best scenario for the development of that area. But now, it looks like they’ve totally withdrawn from that position, and now we are just discussing the layer of protection.

There’s been a lot of international media attention; Patagonia also made a video about the issue. What have been the other successes so far?

I mean, if you go back ten years or more when we started complaining, people were not even looking at us seriously. That time was a very good ‘hydro time’ back in 2012 – 2013. Hydropower was the sexiest thing in the market, in the world.

First, we tried to gather arguments and science-based evidence as to why hydropower is not that green, why hydropower in Vjosë would not be good—for example, why it would harm the uniqueness of the river, why it would harm the last hotspots of biodiversity. We also talked about why the way hydropower was designed and planned to be built was actually in the wrong location and wrongly designed; it would not be economically feasible and viable in the long-term. And of course we talked about all the other negative effects of the dams upstream and downstream, such as the increasing cost of erosion, the increase of droughts downstream of the dam, the increasing effects on the microclimate, especially on the reservoirs on the upstream part, and the impact on water quality.

We carefully analyzed all this data and brought it to the public, to the media, and to the government to show that this is not the right direction. There’s more evidence and proof that if you conserve that area, if you use it sustainably and wisely, it can bring more benefits in the long-term, and you can still have the river, you can still have the natural heritage, you can continue to use it—and there could be an alternative way in the future if you want to build.

So, we got rid of all their arguments, and we got close to the media and the international media. It has gained a lot of attention, and all these celebrities have been hooked to become big supporters of the campaign. Patagonia, as well—since three years ago, Patagonia has been one of the biggest supporters of our campaign, and since November of last year, it looks like they want to be more and more involved—they want to work more toward the proclamation of Vjosë as a national park.

How can people help?

For this, we are assuming that we need a period of roughly three years… [because] it’s not something ordinary like the traditional national parks. It’s a flowing aquatic ecosystem, and there are communities all along the river banks. Every site must be checked, and it’s not really standardized from a nature conservation perspective, but there are models.

Right now, we have a petition, and we are aiming for 100,000 signatures. People can donate at the bottom of our site—because even if the government becomes willing to support the national park becoming a reality, there is still lots of extremely hard work to do; work that will need a lot of energy, a lot of expertise, and a lot of money.

MSc. Olsi Nika is an environmental biologist and an expert on the biological assessment of water quality. He has participated in different projects related to biological environmental monitoring. He is currently involved with The Center for Protection of the Natural Ecosystems in Albania (EcoAlbania).