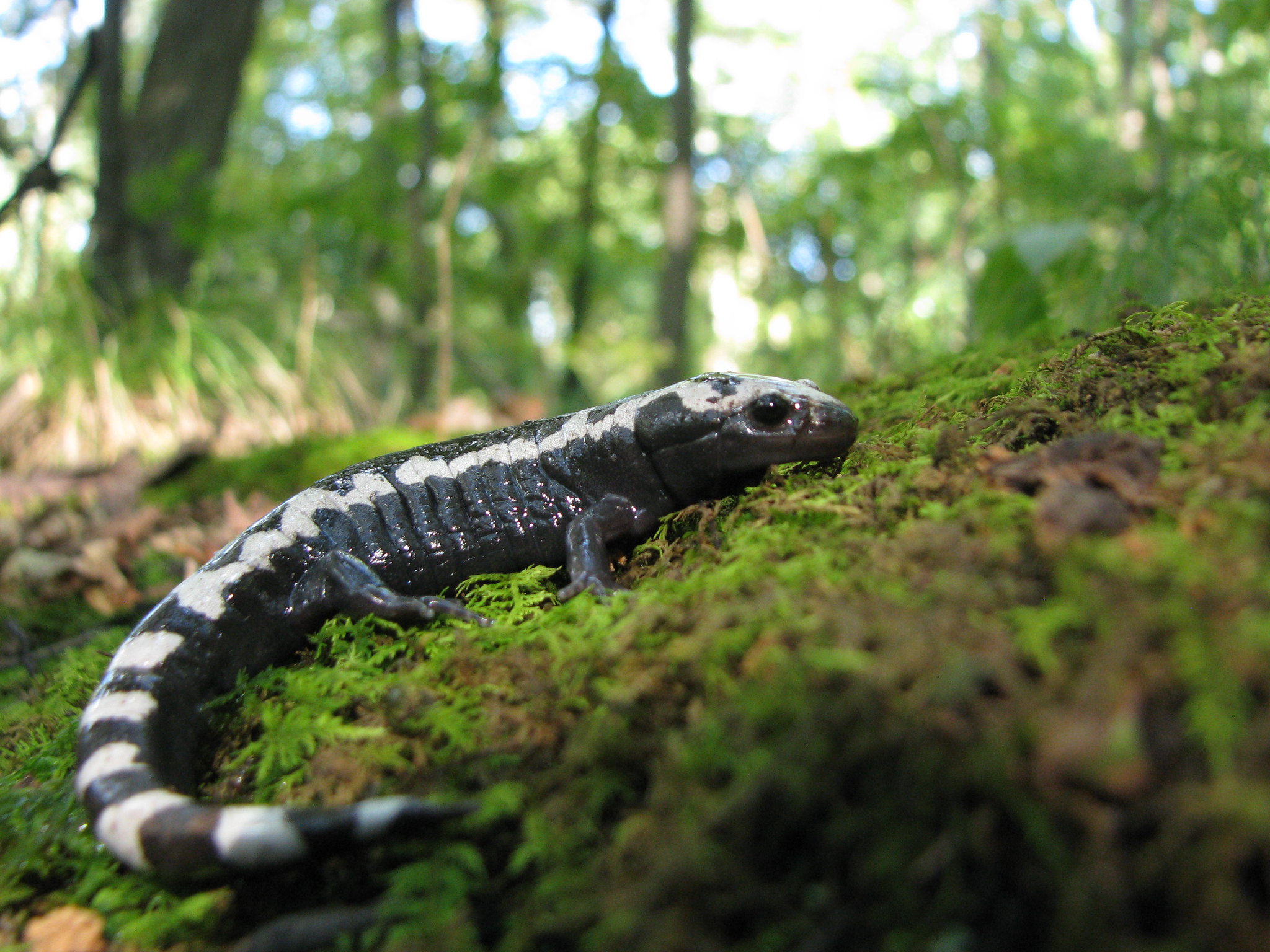 As temperatures rise, will species have enough habitat to move to suitable ground? bonnyboy/flickr, CC BY

If you flip over a log in a forest in the southeastern U.S., you are likely to find a squirming salamander.

A healthy forest floor, full of fallen branches and rotting leaves, provides these amphibians with the moisture, protection and food they need to survive and thrive. If rain falters or if temperatures rise too high for these animals to survive, they would need to move to another cooler, wetter part of the forest.

However, many of the forests in the southeastern U.S. exist only as isolated patches, split up by agricultural fields, highways or housing developments. Suppose the cool, damp patch of forest in which our salamanders need to make their new home is on the other side of an exposed, sunny peanut field. The salamanders may dry up or overheat before they can cross the field to find their new home.

About 45 percent of the U.S. is relatively undisturbed by human beings. These natural areas, such as the forest patches of the Southeast, provide homes for many species today. But those species will undoubtedly need to move in the near future as temperatures continue warming and precipitation shifts.

Is there some way we can plan for and aid species to adapt as the climate changes?

Species on the move

In a recent study, my colleagues and I examined where human impacts prevent plants, animals and insects from migrating to comfortable climates as temperatures continue rising.

We first considered a scenario where the rate of carbon dioxide emissions decreases over the next century. In this case, temperatures are predicted to rise by only 5 to 10 degrees Fahrenheit across the U.S. by 2100. That means if species are going to outrun this warming, they would have to reach locations that are 5°F to 10°F cooler than the places where they currently live.

In our study, we found only 41 percent of the contiguous United States has natural patches connected to places cool enough to allow species to flee these rising temperatures.

If carbon dioxide levels and temperatures continue to rise, the consequences for climate connectivity are even more dire. In this case, only 31 percent of the existing natural area is connected to cool enough areas to allow species to track their preferred climates.

So what can we do to help our salamanders (or any number of other species)? Several strategies have been proposed to help species reach the climate zones where they will be able to survive.

One solution is for human beings to physically move animals or plants to places that we deem suitable, in a strategy known as human-assisted migration. However, the most commonly suggested solution to help species’ movement is to restore habitat in order to connect up existing natural patches, creating what are known as conservation corridors. Although both strategies can be valuable depending on the circumstance, corridors facilitate movement for many species simultaneously and allow communities to shift on their own.

Suppose we were to help out those salamanders. We could extend the forest patch, planting trees to create a forested corridor along the edge of the peanut field. This would give the salamanders a safe way to reach the new areas where they will be able to survive into the future.

Now suppose we connected up all of the natural patches in the U.S., allowing free movement for all species across inhospitable, human-impacted areas. Would this then allow all of those species to outrun rising temperatures? The answer is that sometimes connecting these patches helps, and sometimes the species still cannot reach cool enough places.

We found connecting natural land patches improves climate connectivity by 24 percent given moderate warming. That means that plants, animals and insects living in 24 percent more land area would be able to successfully flee rising temperatures than if no connecting patches were available.

Species benefit most when we connect low-lying areas in the foothills or along coastal regions to cooler mountains or inland regions. Thus, our salamanders might have the greatest chance of reaching a cool home if we connect their coastal forest to a more inland, mountain forest. But patterns of improvement differ in different parts of the country.

The western portion of the U.S. has less human disturbance than the eastern U.S. It has the majority of the parks and protected lands. The West also contains quite cold mountain ranges, including the Rockies, Sierra Nevadas, and Cascades. These mountains provide the cool temperatures necessary for species to outrun warming temperatures. As a result, climate connectivity is at 51 percent without connecting natural land patches, meaning that the species living in only about half of the natural area of the West will be able to move to safer locations. That increases to as high as 75 percent if natural lands are entirely connected.

In contrast, the East has only 2 percent of climate connectivity if patches are not connected by corridors. This increases to only 27 percent climate connectivity with corridors connecting all natural patches. These low numbers occur in part because the eastern U.S. has fewer, smaller protected natural areas. But the Appalachian and Ozark Mountains in the East are also much older and lower than western mountain chains. Thus, eastern mountains do not provide cool enough destinations for many species to outrun climate change.

The southeastern U.S. has the highest diversity of amphibians in the country. It is also home to a large diversity of plant, mammal, insect and bird species. The distress of our salamanders could represent the decline of an entire biodiversity hotspot. By connecting natural areas in the East, and particularly the Southeast, we could help many species survive.

Creating these corridors can require different amounts of cost and effort depending upon the goal. In Britain, a conservation organization simply encouraged residents to raise the bottom of their garden fences by a few inches, creating a “hedgehog highway” for when these prickly city dwellers needed to migrate in the winter.

In Wyoming, corridor planning has involved a larger effort. There they built tight fences along the highways and constructed highway overpasses and underpasses covered with native plants. These have allowed wildlife to safely cross highways and reduced wildlife-car collisions by as much as 85 percent. In the Southeast, many conservation groups are working together along with local landowners and government agencies to begin connecting natural areas, but these efforts are in early stages.

The 10 hottest years have all happened since 1998. Droughts are becoming more intense. Birds, mammals, insects and plants have already been documented moving northward and upward in elevation. And many more species may need to move but are limited by human activity. Armed with the knowledge of the types of places that most successfully allow species to outrun warming, we can make strategic decisions about corridor placement that will simultaneously benefit many species.