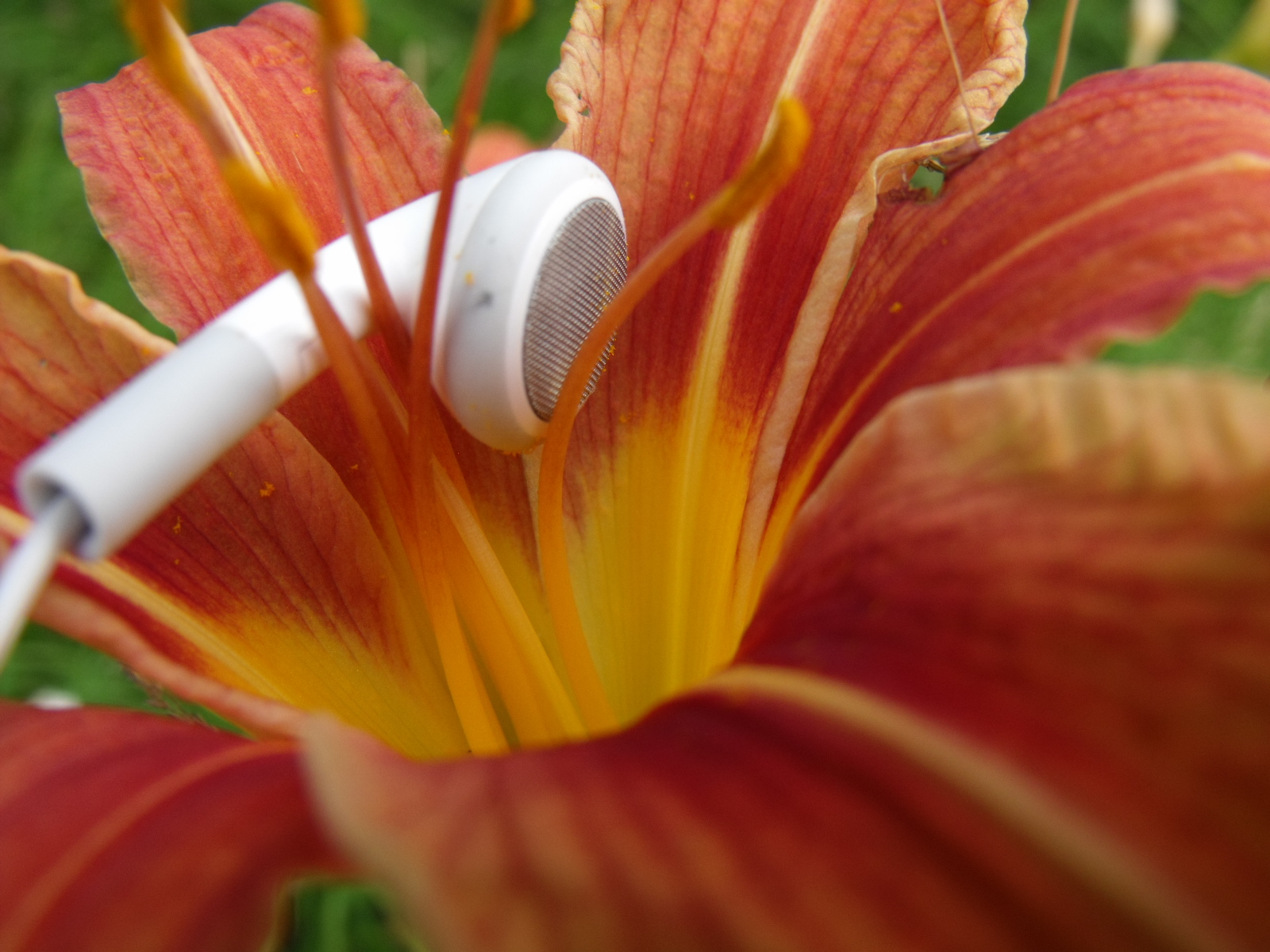 Plants Have an “Ear” for Music

While he was a soldier stationed in a Korean demilitarized zone in the 1960s, the late Dan Carlson, Sr. was horrified when he saw a mother intentionally cripple her child to receive food subsidies. Moved by that experience, he enrolled after returning home at the University of Minnesota under his GI Bill, and buried his head deep in herbology and plant pharmacology textbooks. He was determined to find a method to increase plant growth and help reduce, or even eliminate, world hunger.

Years later, Carlson believed he found part of his answer. He maintained that “green music”— sounds akin to, or recorded from, those found in nature, like birds singing or crickets stridulating—possesses frequencies that boost plant growth and yield rates. He claimed that when exposed to synthesized birdsong, a plant’s stomata—the mouth-like pores on the underside of leaves that absorb water and nutrients and expel oxygen—widen. Before he died in 2012, he listed growing a Purple Passion (Gynura aurantiaca)—a houseplant that usually grows up to a foot—1,300 feet high to the sound of green music as one of his lifetime achievements. It earned him a Guinness World Record.

Carlson patented his research in 1985 and began selling auditory fertilizer called “Sonic Bloom,” a mix of New Age music and nature sounds, to other growers in the United States, Mexico, and Australia. “We use it on corn—the stocks get really tall—and we’ve been using it on cannabis, too,” said Dan Carlson, Jr., the son of the late horticulturist. “You see the plants react poorly without the [sound] box. They look kind of sad.”

Eyeing his plants one day, T. C. Singh, head of the botany department at Annamalai University in India, may have had a similar impression. In the 1960s, he began playing classical music for plants. He claimed this significantly increased the crops’ height as well as their overall biomass —the organic material comprising plants.

In the 1973 book The Secret Life of Plants, Christopher Bird and Peter Tompkins, both writers and former government spies, went further, reporting on the possibility of plant consciousness. Most controversially, their work cited the experiment by the then-leading polygraph expert Cleve Backster, who in 1966 hooked up electrodes to his dracaena—a common shrub—and “found” that the plant could feel stress. According to the amateur botanist, when he imagined the plant on fire, it sent a surge of electricity that the lie detector picked up. Other research covered in the book included the IBM research scientist Marcel Vogel’s claim that plants “feel some kind of energy field” produced by humans.

Although The Secret Life of Plants went on to become a best seller—with one critic calling it “the funniest unintentionally funny book of the year”—academics soon wrote scathing reviews. Experts have argued that the pair heavily relied on pseudoscience, and many of the results, which came from single experiments, have been unreplicable. As a result, the duo tainted this area of inquiry.

But whatever stigma attached to the field didn’t scare quite everyone away. Sonic Bloom and plant polygraphs notwithstanding, plant bioacoustics is a growing field of interest in science.

According to a recent study published in Scientific Reports, a team of researchers from Yeungnam University in Gyeongsan, South Korea, found, just as Carlson did over 30 years ago, that “green music” can cause plants to undergo biological transformations. Many of these, as studies in plant bioacoustics have historically concluded, are beneficial to plant growth: the size and total mass of the plant body itself, like leaf formation and plant height, as well as size yields, the volume of a seed. As the researchers write, “Green music itself has been shown to increase oxygen uptake and polyamine content in Chinese cabbage,” both of which contribute to its growth.

In their study, the researchers found evidence that sonic vibrations—not unlike those from crickets or birds—cause biological reactions in vegetation. After planting and raising Arabidopsis thaliana, a common weed, in artificial soil for over three weeks, the Yeungnam research team transferred their subject into a soundproof chamber. Researchers then tested five different groups of Arabidopsis, broadcasting one of five different frequencies (250, 500, 1,000, 2,000, or 3,000 Hertz) via loudspeakers for one-hour intervals, at a constant amplitude of 80 decibels overall. (They also left a selection of plants in the sound chamber without exposure to the sonic vibrations, as a control.) Researchers harvested samples of the subjects for testing at one hour after exposure, as well as after one and two days.

The broadcasts affected the plants on a molecular level—the ones exposed to 500 Hertz especially so. The scientists found over 703 changes in gene expression after exposing the Arabadopsis to 500 Hertz, compared to the control; the second largest number of changes in gene expression, 596, occurred in the plant exposed to 3,000 Hertz. These changes were related to the production of transcription factors—proteins that control what parts of DNA get copied as messenger RNA—how long plant stomata stay open or closed, and photosynthesis.

Hanhong Bae, a professor at Yeungnam University’s Plant Molecular Metabolic Engineering Lab, and a co-author of the study, said that although they confirmed that plants do react to sound biologically, they are still testing various hypotheses to explain how the plants react to sound at the molecular level. “They probably just feel sound vibrations, and the air movement touches cell wall, cell membrane, so every cell wall or cell membrane maybe functions as an eardrum,” Bae said. “Maybe there’s some kind of channel tunnel that changes the configuration or structural channel, then maybe it could cause signal transduction,” the transmission of molecular signals from the cell interior to its exterior.

In a 2014 study, researchers from the University of Missouri recorded the sound of a caterpillar chewing on the leaves of Arabidopsis thaliana, the same plants used in the Scientific Reports study. They had noticed that, when mounting a defense against pathogens, the plants increase their levels of glucosinolates, chemicals involved in the production of mustard oil. Curious about how plants “knew” when they needed to produce the chemical, the researchers recorded the sound of a caterpillar chewing Arabidopsis leaves and played the recordings back to a Arabidopsis that hadn’t been chewed on—along with vibrations, as a control, from wind and leafhopper songs, the latter of which are similar in frequency to the caterpillar chewing but have different temporal patterns. The research team discovered that when the plants merely “heard” the caterpillar chewing, the plants upped their glucosinolate levels.

“Plants are probably using mechanoreceptors, which sit in the membrane of cells,” Heidi Appel, a member of the University of Missouri research team, said. They’re “proteins that transduce external pressure to an internal signal—sometimes calcium, sometimes other things—but they transduce pressure to other chemical signals” too, she said. When exposed to wind vibrations and treehoppers, or thorn bugs, for example, the Arabidopsis did not react like it did to the caterpillar sound. For her, this is a sign that plants have evolved reactionary mechanisms to specific sounds.

Appel notes that when people play sounds like caterpillars’ chewing or Beethoven’s Fifth, something is “definitely caus[ing] plants to react.” She noted that Stefano Manusco, a researcher at the University of Florence’s International Laboratory of Plant Neurobiology, claims the latter has improved the growth of his vineyards. “A proportion of frequencies in a particular rhythmic pattern”—like Beethoven’s Fifth—“[may] resemble enough of something that they have evolved to identify,” she said, “and that creates a response.”

No one yet has an answer to “why” plants react to these sounds, Appel said. But figuring that out, she assured, is already underway: “Those experiments are starting.” Rex Cocroft, her co-author and colleague at the University of Missouri, is designing custom playlists that will isolate the high amplitude spikes found throughout the frequencies of caterpillar chewing. Serenading the plants with these custom playlists could confirm what key auditory components stimulate the reaction. “We’ll be able to figure out a little bit better what unique aspects of the caterpillar chewing are,” she said, which will help illuminate the link between plant’s growth and what they “hear.”

Matthew Sedacca graduated from Columbia University Graduate School of Journalism, and is a freelance writer based in New York.

This article was originally published in Nautilus.