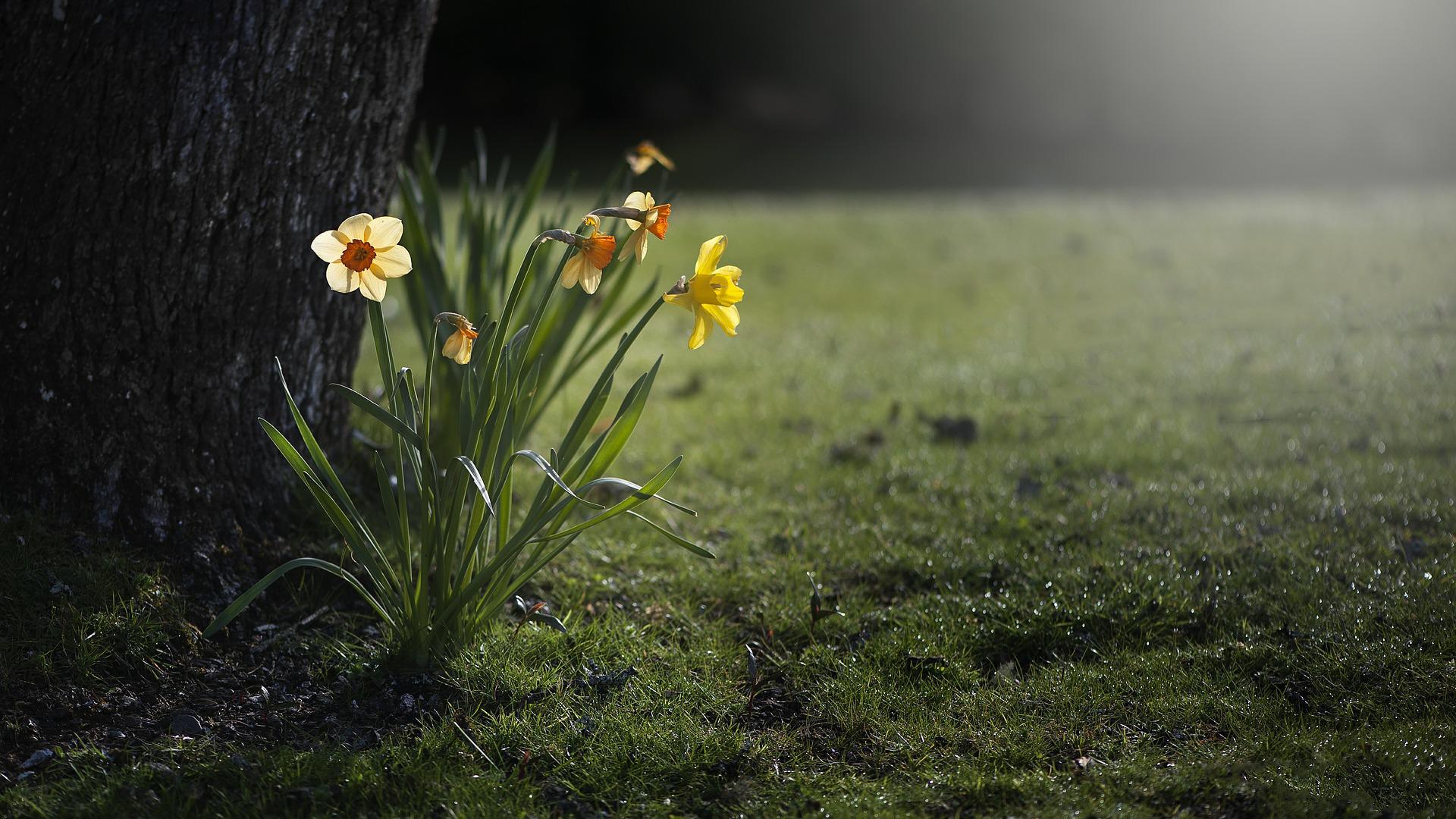 The Narcissus in Art 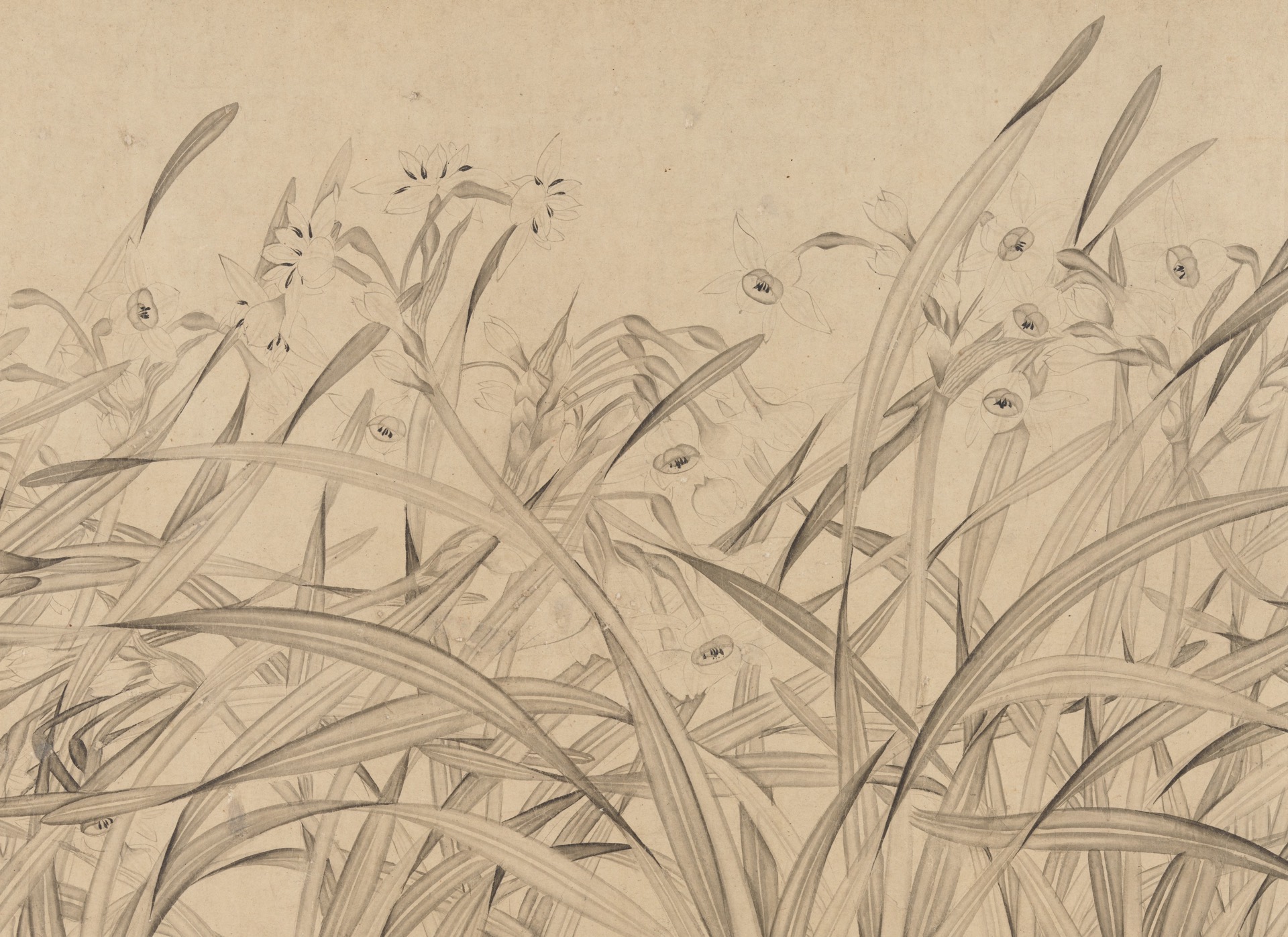 As far back as the 5th century BCE, the narcissus appeared in Cypriot sculptures representing the goddess Kore holding in her hands a “ball of narcissus.” But it is the Greek myth of Narcissus falling in love with his own reflection that has become the flower’s primary connotation in Western culture. However, the majority of works concerning the beautiful ephebe make little mention of flowers: in fact it is only upon his death that the flower crops up, in place of his body. Symbolising the metamorphosis to come, its petals occasionally peep out from some depictions of the myth, as in Echo and Narcissus (1624) by Nicolas Poussin, where a few white narcissi emerge from the ground forming a halo around the head of the deceased. In 1903, in one of the most famous representations of the myth after that of Caravaggio, John William Waterhouse shows the nymph Echo gazing with a melancholy air at the handsome Narcissus who has rejected her. The young man, indifferent to her presence, is lying at the water’s edge with his face outstretched towards his reflection. At his feet are two inconspicuous narcissus flowers, one of which, with its stem broken, almost touches the ground. At the beginning of the 20th century, the flower came to symbolise a more Freudian narcissism. The German painter Christian Schad (1894–1982), who often used symbolic flowers in the background of his portraits, painted a self-portrait in 1927 with a white narcissus behind his lover which is tilted towards him, as if to underscore his own vanity. A few years later, the painter Felix Nussbaum (1904–1944) painted Narcisse (1932): a naked man looks at his image in a mirror suspended from a broken column while a yellow narcissus springs out from his heart. In 1938, Salvador Dali presented his painting The Metamorphosis of Narcissus, which he had completed the previous year, to Freud. With an accompanying poem by the painter, the work shows the eponymous flower sprouting from a cracked egg held, beside a pool of water, by a gigantic stone hand the shape of which resembles that of Narcissus’ listless body. This mirror image reinvents the myth through the prism of the nascent practice of psychoanalysis and through what the artist called his “paranoid-critical method”. 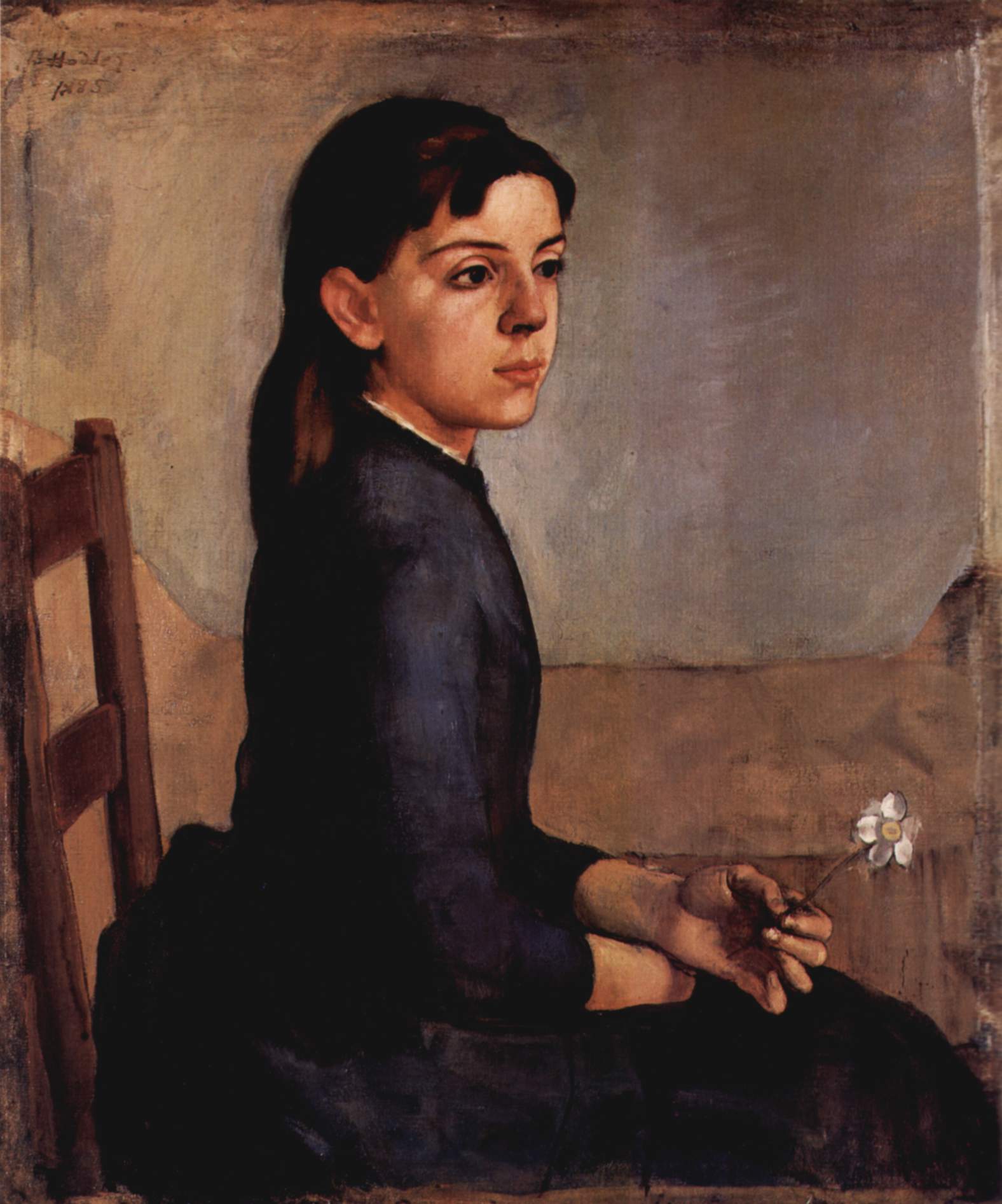 From observation to ornamentation
But the myth of Narcissus is not the only motivation for portraying the flower. From the Renaissance, a growing interest in natural sciences prompted many Western artists to devote themselves to the study of nature. Flowers especially were drawn and painted in meticulous detail by these naturalist artists. Some of these botanical plates are decidedly out of the ordinary, like those of English artist Mary Delany (1700–1788), who by the end of her life had made almost a thousand images of flowers using paper découpage. Astonishingly realistic, these ‘paper mosaics’, which are accentuated using watercolour, stand out against their background of black ink with striking intensity. Within this paper herbarium, now held in the British Museum, is a remarkable series of narcissi, from the delicate Narcissus poeticus to the weighty Narcissus tazetta. At the dawn of the following century in France, Pierre-Joseph Redouté (1759–1840), nicknamed “the Raphael of flowers”, brought together hundreds of his botanical illustrations in an eight-volume publication entitled Les Liliacées (1802–1816). In the third volume, he details the characteristics of about 10 varieties of narcissus illustrating with scientific precision their flowers of either yellow or white, their trumpets either short or elongated, ruffled or not, without overlooking the invaluable bulbs which he makes sure to mention are toxic. Gradually botanical studies began to inspire more stylised illustrations and decorative motifs. The simple shape of the narcissus flower, with its six petals in the form of a star and its cup-like centre, made it easy to draw, ideal for decorative designs. At the end of the 19th and beginning of the 20th century, the narcissus became a common motif within the Art Nouveau movement, appearing on objects such as trinket trays, candlesticks, brooches, mirrors and vases. The founder of the École de Nancy, Emile Gallé (1846–1904), notably produced a number of vases decorated with the flower depicted in relief using the polychromatic cameo glass technique. In the field of illustration, Eugène Grasset (1845–1917) produced a 1898 calendar for the Parisian department store La Belle Jardinière which he decorated with narcissus flowers among interlacing stems in an arabesque style typical of the Art Nouveau movement. However, Grasset did not come to use this kind of stylisation without first examining the flowers in the way the naturalist artists of the preceding century had done, as is evident from his study of a narcissus flower in pencil and watercolour which is housed at the Musée d’Orsay in Paris. In the same period, George Auriol (1863–1938) also used the narcissus and its long stem with its slender, undulating lines, in a manner more influenced by Japanese art, to illustrate books, musical scores and programmes for the Théâtre du Chat Noir, the famous Montmartre cabaret. 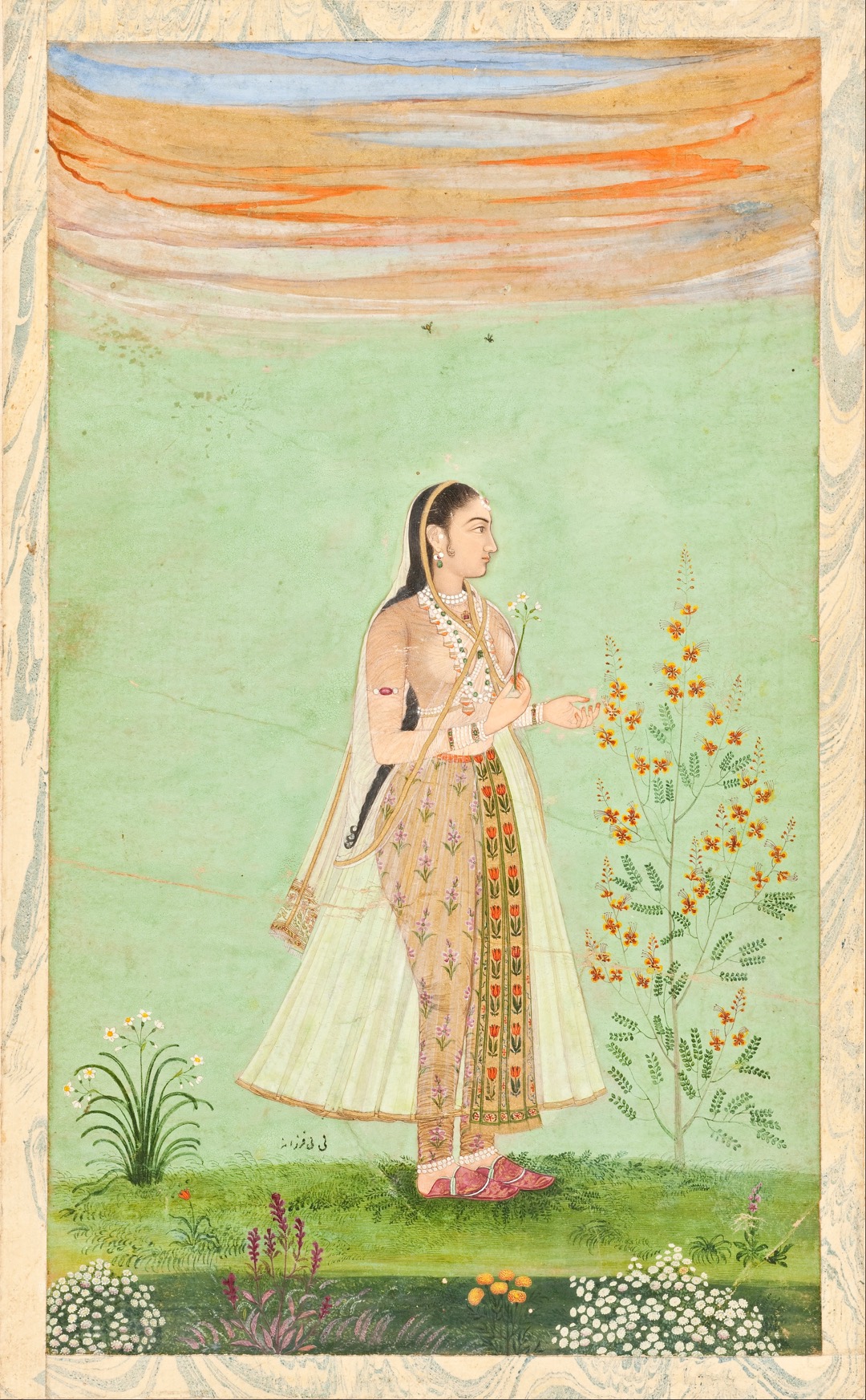 The Silk Road
In the Middle and Far East, the symbolism of the narcissus has given rise to quite different artistic interpretations. A very common feature of Islamic gardens, narcissus is one of the traditional flowers of the Iranian new year which marks the spring equinox. Its almond-shaped petals also mean it signifies beautiful eyes in Persian culture, and artists place the flower between the fingers of female subjects whose beauty they want to emphasise. Narcissi are also often found in the illuminated manuscripts from Iran, India and also Afghanistan from the 16th to the 19th century. We owe one of the most beautiful depictions of the narcissus in Islamic art to the Iranian painter Shafi Abbassi (1635–1674), who in 1653, influenced by European books on ornithology and botany, painted a goldfinch perched on the bending stem of a narcissus whose vivid flowers have also enticed a butterfly and two bees.

The Narcissus tazetta variety, originating in the Middle East, was introduced to China via the Silk Road during the Song dynasty (960–1279). Here too the narcissus became a traditional new year flower, as well as a symbol of good luck. Since the 12th century, it has inspired Chinese poets, painters and ceramic artists. It can be found portrayed on fans and snuff bottles, as well as in many paintings and drawings. In China, narcissus flowers are often represented next to water – in an echo of the Chinese nickname for the flower, ‘water goddess’ – or alongside plum blossoms, bees, butterflies or birds, images of nature’s renewal in spring. 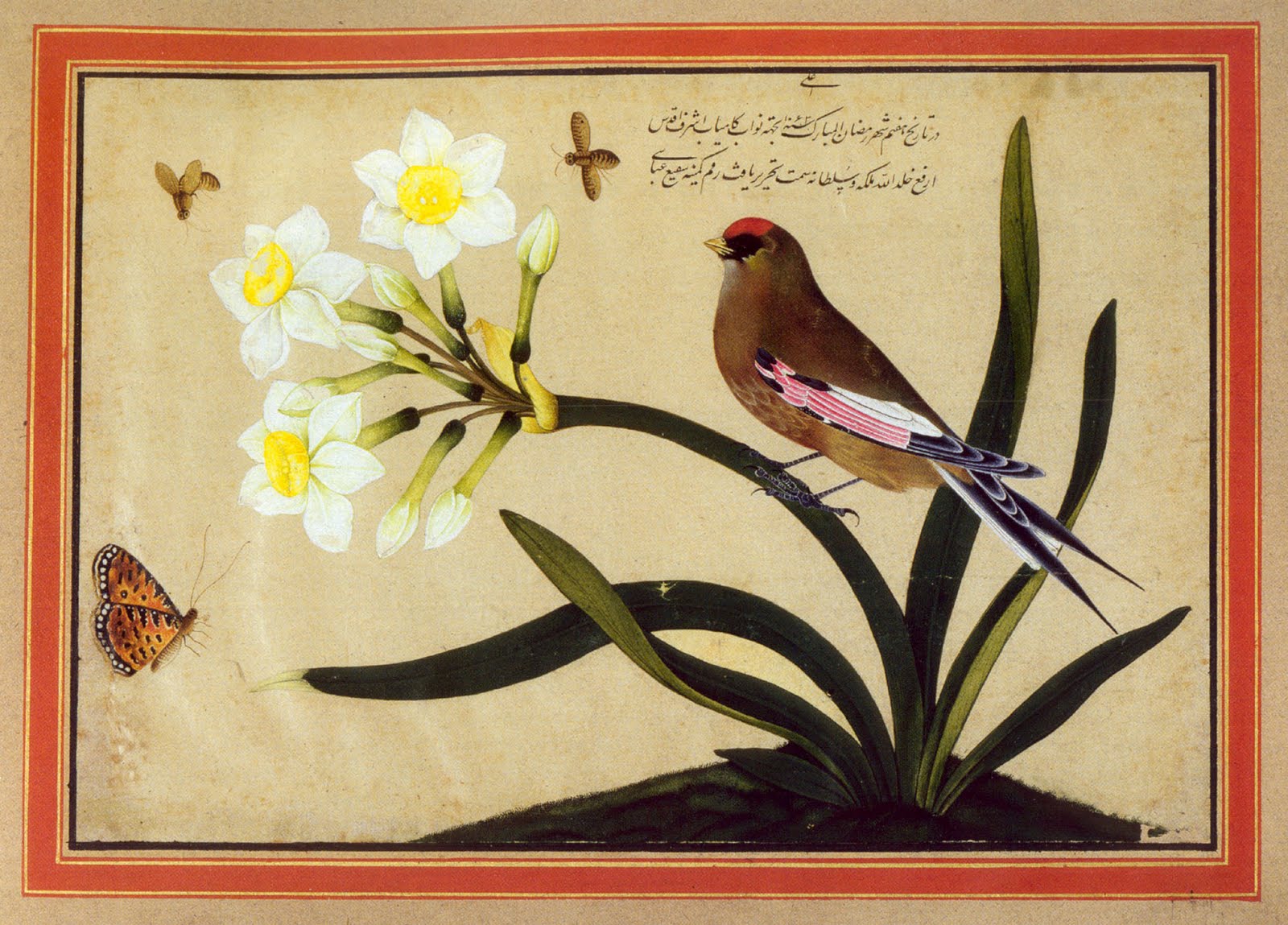 In the 13th century, Zhao Mengjian (1199–1295) created several drawings and paintings of narcissi, but his absolute masterpiece, today found in the collection of the Metropolitan Museum of Art, consists of a long paper scroll upon which unfolds an ink drawing of a tangled mass of slender stems and flowers bending as if they are being blown in the wind. The narcissus remained a recurring motif in Chinese art throughout the Ming (1368–1644) and Qing (1644–1922) dynasties right up until the middle of the 20th century, when depictions became less detailed and more stylised. In Japan, lastly, it is mainly during the Edo period (1615–1868) that the narcissus appears in compositions reminiscent of the ikebana style – often a single stem placed in a bowl or beside a rock.

Want to learn more about Narcissus?

From scholarly botanical plates, painters’ sketches to Chinese and Japanese etchings, from the meandering ornamentation of Art Nouveau to delicate Islamic illuminations, from still-life paintings bursting with flowers to Fauvist and Impressionist bouquets, from the radiant Champ de Narcisses (1942) by Francis Picabia to the star- strewn English meadows in the work of John William Waterhouse, the narcissus, as a symbol of vanity, the return of spring or a simple decorative motif, has criss-crossed through art forms and cultures with its solar brilliance.

Clara Muller is a French art historian, writer, and curator, holding degrees in Literature, Art History and Museum Studies from Université Paris Diderot Paris 7, Université Paris I Panthéon-Sorbonne, New York University and Columbia University. She is the co-curator of the Living with Scents Exhibition at the Museum of Craft and Design in San Francisco.