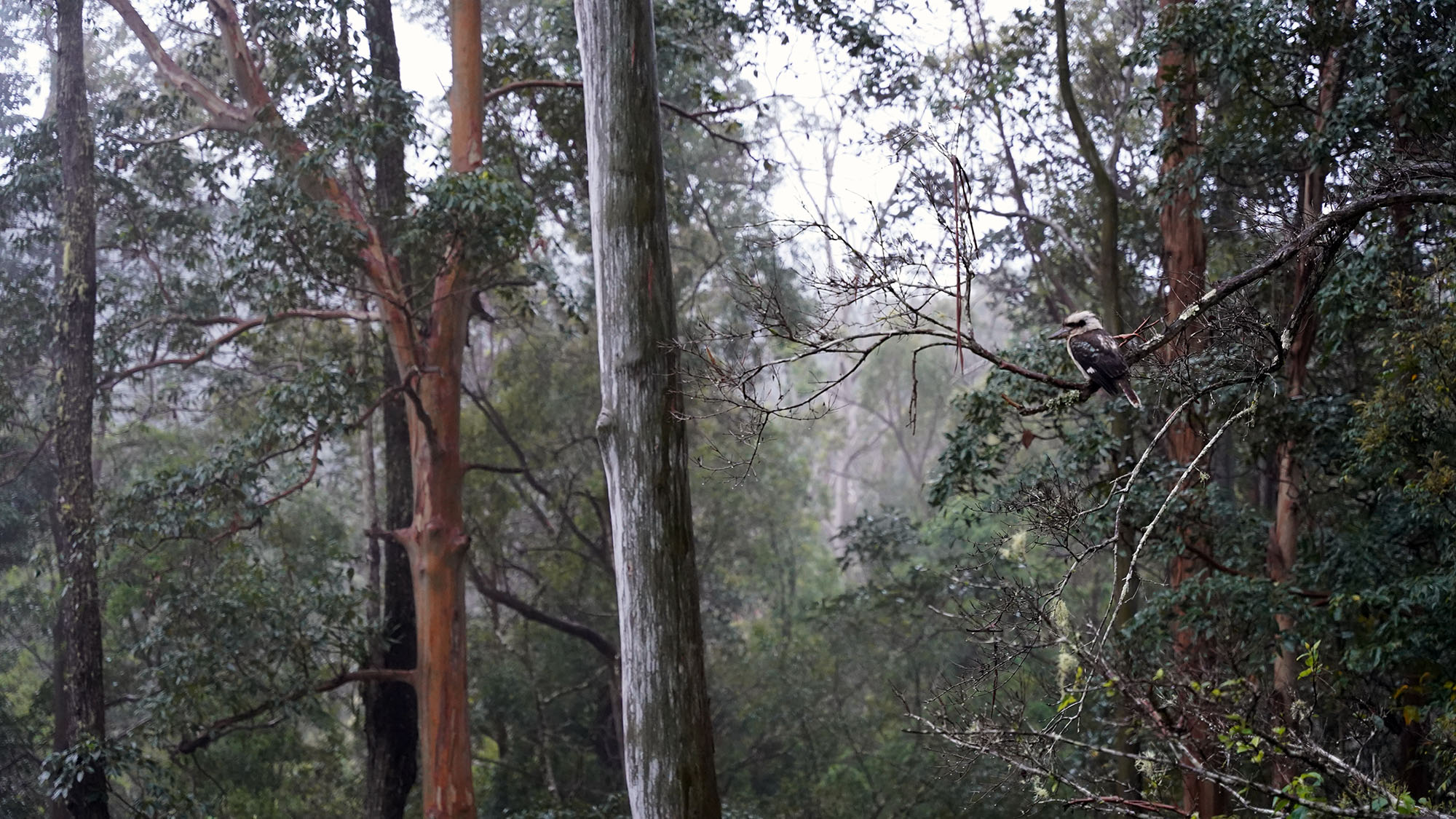 These words are being shaped within a forest of tall trees. I write from a little rustic shack in the foothills of the Border Ranges, a World Heritage Listed Rainforest located in a region that has “the highest concentration of marsupial, bird, snake and frog species in Australia”.1 With respect to the First Nation People, this is Gulli-bul and Githabul Country.

We are six days in to the beginning of spring here. I can say this so definitively because the change-over from winter was marked by the arrival of fireflies and the budding of red cedar. Perfume is not carried on the warm streams of spring air now arriving, our season is more sound then it is scent.

The forest that wraps around me is an auditorium for the litany of bird songs that rise and fall, depending on the presence of predator and the mood of the sun. I have heard this place referred to by both Gulli-bul and Githabullocals, as an upside-down forest, called so because Eucalypts grow amongst rainforest trees and vice versa. There is no delineation of ecotones between gullies and ridges, between vegetation growing on north-facing or south-facing land, as there once was, once upon a time.

I moved here six years ago with the express purpose of feeding a soul hunger – to learn directly from the bush. Trees and birds are good teachers. I’d had my fill of human knowledge, particularly academic and western ontology, which as incredible as it is, has amnesia in practical translations of relational governance.

At this juncture, it will be valuable for you to know two things about my story. The first is that my philosopher nature is evident in the fact that I still do not have a veggie garden (despite living remote and off-grid, within a greater community of regenerative farmers and syntropic-agriculture enthusiasts), but have instead cultivated a deeper quandary on how our species can inaugurate (wide-spread) bio-cultural relational governance at this time.

The second is that I have long been in awe of the knowledge systems belonging to the first people of this country. The existence of a whole continent of people who practiced a complex and caring relationship with land and waters for thousands of years until colonisation, is evidence that humans can sustain themselves in balance with the life systems they live with and within. This gives me great relief and hope!

I was born on Australian soil to a settler culture with scant remnants of cultural story or song. Whilst I belong to a great family, I have no ancestral knowledge of living with living systems, which I consider to be critical for survival and beyond that, essential for evolution. I am also averse to cultural appropriation (in that First Nation knowledge is not for the taking to fill my void), so I deposited myself in the bush to begin learning in situ from the plants and the creatures and the systems I inhabit space with.

As a lover and researcher of mythology, I can tell you that it takes about seven generations or 200 years for a mythological story to be born, to become Myth and embodied in the veins of a culture. I feel the birth of ecological knowledge is much the same, for it too requires the passage of time, cycles and seasons, to be pummelled into truth and infused like instinct. Hence, I have learnt very little in the six years I have inhabited this place, but I will share the morsel that I have.

What I am discovering is that my hunger to listen and learn from land, is a longing for the health of the world, for a time when earth is not filled with upside-down forests but thriving as the ecosystems it once was. But such a longing feels indulgent in this epoch. New weeds march in here every week, most recently they come wielding spikes and prickles (there’s a metaphor in that I’m sure). The spread of weeds is exacerbated post fire and flood, and in my short time living here we have moved from a drought that decimated flora and fauna populations, through the devastating 2019 east-coast bushfires, to the unprecedented flooding of this region earlier in 2022. I find this upside-down forest gloriously complicated, in both it’s natural evolution and it’s response to human-impact, but it is hard to tell what are the ‘natural’ cycles, and which are induced by climate change.

What I am seeing is a continual arrival of weeds, a noticeable decline in creatures, a vast death leaking through the trees (caused by ecosystem imbalances resulting in effects such as the Bell Minor Associated Dieback and the fungal pathogen plant disease, Myrtle Rust), and a continual displacement and mixing of species that do not ‘typically’ grow together.2

How can I know what to do in this self-seeded upside-down forest that 40 years ago was a cow paddock? I have experienced many days absolutely at a loss, between having no idea and feeling like a coloniser. The truth is I don’t know and I am no wiser after 6 years of living intimately with this land. I could continue with my efforts to remove the lantana and clear the camphor laurel which I thought would help regenerate the bush back. But what does that mean to put habitat back? I have just watched floods demolish bush regeneration projects that were 3, 15 and 40 years in the making. All that work washed away overnight. The world has changed forever, what is needed here is a relationship with collapse, as a practice, not a theory.

So, I come back again to mythology, the human wayfinder that remembers what has long been forgotten by many humans, but was once known by all. There are creation stories of extreme significance that say humans were created for the sole purpose of looking after the earth. Dr Noel Nannup, a Nyoongar Elder from the South-West of Western Australia, tells of such a creation story in which humans are chosen from among several species, to be the caretakers of everything. This theme or truth, depending on your lens, is echoed in many First Nation stories around the world, and can be found in the scriptures of many predominant religions, meaning the seed of this concept is rooted in most people’s origins.

It’s a beguiling prospect that our species role, our main ecosystem function, is to tend the earth – lands, waters and creatures. This is the upside-down version of what the majority of our species have been doing the past century. So, fittingly I asked the upside-down forest “How do I care for you, what does that look like, to care for a non-human system?”.

And the upside-down forest answered “It’s not to fix or change or save for your own benefit (or for what you assume may benefit the other), it’s to embody care through the very act of caring itself. An alchemical transference happens in that act, like the perfume of spring be it scent or sound, it’s invisible but it’s present”.

And so, this is where I find myself, wanting to open to the advance of weeds around me as a reorganisation of time and place. Rather than stressing on the minutiae of what is passing and being lost, I want to spend energy on the practice of tending, and learn to be a caretaker for what is here.

And what is here is an entrancing dawn chorus. It fills me with life each morning. I reflect on how fortunate I am to live with such wonder, and then I consider the birds. Less and less habitat remains for all these incredible winged friends and I feel this upside-down forest is a sanctuary for them. I start thinking about planting food-trees for them, this is a way for me to tend what is here, the birds! I know this action deviates from regenerating a faded habitat for the hope of bringing back what once was, and it contravenes the theory for restoring rainforest gullies and open grassy woodlands. In effect, my food-tree plantings for the birds could mix up this forest even more. But I don’t want to have amnesia any longer, everything is accelerating and it is time to tend the beauty in our wake.

The trees had a long plan, cast out beyond time. That is how they flew whilst anchored eternally. Trees grew in more ways than one.

Trees grew in more ways than one, some even habitually sacrificed their leaves to the soil, a magical celebration of the earth, their home. For what a place to be born to.

Ilka Blue Nelson is a philosopher, a creative ecologist who produces her work through Latorica Studio (www.latorica.net). She holds a Masters of (Arts) Research from Queensland University of Technology and works with arts and environmental organizations from government, industry, academia, NGO and community sectors. She calls Latorica Studio a “slow-burner, earth-centric storytelling platform that produces words and moving image to inspire healthy connection with land and waters. In conventional terms, she says that means that she “finds great satisfaction in collecting sticks.”

2 I have 2 short films that speak to Bell Minor Associated Dieback https://youtu.be/ToHPZjor_4M and the Myrtle rust https://vimeo.com/443761032 ⤶

Plants are Important: The Part About Drugs
By Lewis H. Ziska